Paisley Grammar School was universally known as the Grammar, although its full title, Paisley Grammar School and William B. Barbour Academy, was much grander. The pretensions of the Grammar didn’t help its reputation for snobbishness. Founded by a royal charter in 1576, the Grammar charged fees, the students played rugby and cricket as opposed to football, which was what everyone wanted to play, and had a school song, the Oriflamme:

The torch of our yesterdays

Was kindled by a royal hand.

To bear the Oriflamme always,

And keep it splendid and ablaze,

The torch has ever burned with light

Inspiring, down the days of dust.

They held it sacred in his sight.

To pass it on, a beacon bright:

It was their trust.

Our eager hands are grasping now.

That we shall tend its vital flame

In loyal service to his name

This be our vow.

Despite singing it on numerous occasions, I was never eager or inspired and made no vow.

The Grammar also had a Latin motto inscribed above the front door. It was “Disce Puer Aut Abi.” This translates as “Work boy or get out”, which I didn’t find particularly encouraging.

To be fair, the Grammar did, overall, provide a decent education. Of course, there were good teachers and bad. I had two favourites. Colin Campbell taught me history for two years. He made it come alive and was influential in giving me history as a source of the stories I now tell, so much so that I reconnected with him in 2004 and dedicated a book to him (The Flags of War). I can still visualize the lesson he gave on the assassination of Archduke Franz Ferdinand in Sarajevo. I was so impressed that I went home and wrote the story down, complete with a map of the route the Archduke’s car took and crosses where the assassins stood.

It helped that Mr. Campbell was closer to us in age than many of the teachers at the Grammar and so we could relate more easily. He also had a cool story about his brother who was in the RAF and told us, through Mr. Campbell, how, during the Cuban Missile Crisis, Vulcan bombers loaded with atomic bombs had been distributed to civilian airports around the country and sat, fuelled and armed at the end of the runways with a pilot in the cockpit 24/7 for eleven days. 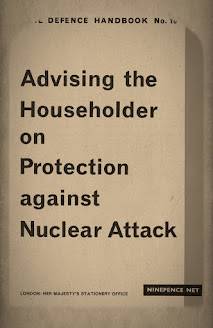 The story resonated because, like most teenagers in the sixties, I really thought the end of the world was round the corner. Our grandparents generation had had a war, our parents had had a war, pretty soon it was going to be our turn. I was hugely impressed and scared by Peter Watkins’ movie The War Game, which in 1965 depicted in documentary style the run up to and consequence of a nuclear war in Britain. I even did a school project on the coming nuclear holocaust and went to talk to Civil Defence experts in the local government. I still have the faded and rather quaint brochures they gave me complete with instructions on how to build a “safe place” out of mattresses in the centre of your home.

I kept a diary during these years of living on the edge and make several references to the possible start of World War Three. For example, on Monday, May 15, 1967, the day I sat my last O Level exam and recorded that today “everything goes back to monotony”, I finish the entry with “I am of the opinion that if the war in Viet-Nam does not stop it will lead to Chinese intervention and an inevitableWorld War 3. It’s pretty frightening but true I’m afraid. Cold sunny day.” Two days later I sadly registered that Colin Campbell was leaving to become head history teacher at Greenock Academy.

My concern with the world and its end dovetailed perfectly with the second of my favourite teachers. We had him for only one year and he taught Religious Instruction. My experiences learning First Corinthians and a burgeoning atheism didn’t encourage high hopes but the teacher overcame those impediments. We were encouraged to research and discuss topics like the morality of having used nuclear weapons on Japan in 1945. The complexity of moral issues that I had always thought simple fascinated me and every scene I have written where a character wrestles with a problem that those around him see as straightforward owes a debt to that unfortunately nameless teacher.

The other side of the teacher coin were the teacher who got into a fist fight with a student outside the lunch room and the chemistry teacher who, for a strap had a narrow, wickedly flexible strip of leather that left angry, painful weals on your wrist if you couldn’t drag your shirt or jacket cuff far enough down your arm.

Oddly, within the culture of violence surrounding us, we admired both of these teachers. The first because he was one of those who had taken us to Austria and because we agreed that the student he hit had deserved whatever was coming to him. The second, his slightly sadistic streak notwithstanding, was a good teacher and, in any case, getting six of the strap from him gave one status in the strangely disturbing competition we boys had to suffer to prove our budding masculinity.

Other incidents stand out in isolation. There was the time I was tripped running along the school corridor and smashed my jaw into a door, loosening a front tooth and causing me to faint at morning assembly. One year a teacher came in from outside to give a lesson on Sex Education. Bizarrely it was only given to the girls and we boys were left hanging around outside fantasizing about the mysteries that were being revealed behind closed doors.

The school library had two bookshelves on one corner containing titles that only fifth and sixth year students could sign out. In fourth year I asked for a dispensation because those shelves contained treasures by some of my favourite authors, Hemingway, Orwell, Maupassant, etc. I was told no, so I got around it by stealing the books I wanted to read. It wasn’t really stealing because I returned the books when I had read them, but I doubt if the school would have looked at it that way had I been caught.

At the breaks during the day, we played a fast and vicious version of poker, three-card brag, for pennies behind the sheds. We played football with a tennis ball in the playground, often with more than twenty-a-side and long arguments about whether a shot was inside or outside the chalked goalposts on the gym wall. We hung out in the covered walkway between the school and the gym, which was the only place we were allowed any interaction with the girls who had a separate playground on the other side of the school. 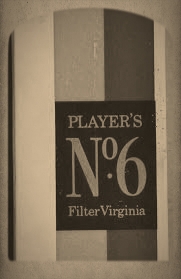 We also hung out off the school property half a block down Mckerrell Street outside a tiny convenience store. The creepy guy who ran the store sold single cigarettes and it was here that all the serious business was carried out. Forbidden literature was exchanged. For a while, Lord Russell of Liverpool’s two books on the Nazi and Japanese war crimes, The Scourge of the Swastika and The Knights of Bushido, held sway and we huddled round in groups reading and shuddering at the graphic descriptions of torture. It was not that we were young monsters preparing to perpetrate these horrors on others, it was more that out lives and experiences were so well-controlled and bland, that we were naturally attracted to anything that gave us a glimpse of a darker world than the one we were supposed to believe in. Yet, even through my morbid fascination, I had a suspicion that listing atrocities was gratuitous and that there was more complexity to history than these books suggested.

Popular as Lord Russell’s works were, they couldn’t compete with sex. Well-thumbed, dog-eared copies of Lady Chatterley’s Lover and Fanny Hill were breathlessly passed around. Tattered copies of Parade and Girl Illustrated and even the rigorously unsexual (although it always seemed to show bare-breasted women and not men on the cover), naturist magazine, Health and Efficiency, circulated. Compared to what any teen can access today on the internet, this was all incredibly tame and bland. Nothing was ever shown apart from bare breasts and bottoms but it was the only window most of us had into this foreign land of sex and the coquettish smiles on the model’s faces seemed to offer so many more unknowns.

Once, I was spotted skipping class and heading down Mckerrell Street. A teacher followed me and I ran, dodging through tenement closes, alleys and back greens—if he didn’t catch me he couldn’t prove anything. I came back out onto Mckerrell Street, only to see that the teacher was still hovering about. I ducked into the convenience store and the creepy guy said I could hide in the back. Unwisely, I did. He came through and brought out two or three dirty magazines. These were ones I wasn’t familiar with but were just as bland as all the others. As I thumbed through them, he tried to fondle me. I was wondering what to do, when the bell of the shop rang and he went through to serve a customer. Hurriedly, I stuffed two of the magazines under my shirt and brazenly walked out through the shop, ignoring the stare of the woman buying groceries. Of course there was nothing the creepy guy could do and the teacher was gone, so I got away scot free.

This was the first suggestion I had that sex was a much more complex part of human relationships than my simple, idealized, clean-cut imaginings promoted by Health and Efficiency. The next day I took one of the stolen magazines to pass round outside the shop and gained minor status for it. I still shamelessly went into the shop to buy my single cigarettes, but I was always careful that others were around. In time, I learned that my experience wasn’t unique. None of us even remotely considered reporting the shopkeeper to the police. It was just the way things were, if you went through to the back of the shop, the store owner would try and fondle you.

At the time I had no qualms and felt no guilt about stealing from the creepy guy, after all many of us tried to shoplift candy given an opportunity. I didn’t even feel disgust at what he had tried to do, he had simply tried something that he could have got in trouble for and that gave me a certain power over him and a freedom from culpability in stealing from him. Today I feel very different about him. He was probably just a sad and lonely man in a time when his sexual preferences could still draw him a hefty prison sentence. I wonder whatever happened to him.

For me, being a student at the Grammar was a world away from the image that the school represented and I never bought into the ethos that it tried to portray. It was a trial that had to be survived but, for all the ups and downs of the rocky journey, the Grammar served its purpose in getting me into university. University was an escape from school but it was also an escape from Paisley and its gangs.