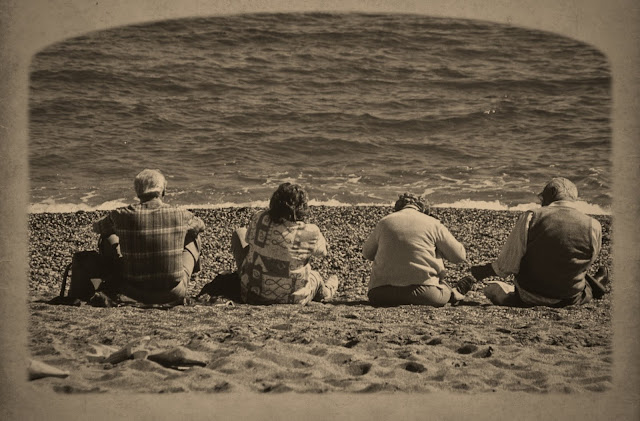 Oh Martha look, the Taj Mahal
see how it glitters so
a masterpiece of ancient art
oh damn, its time to go

Oh Martha see, a Raphael
its filled with life and hope
the form, the lines remind me so
of that old ad for soap

Oh Martha hear, the symphony
the crystal, dulcet tones
its good to sit in here awhile
and rest the tourist's bones

Oh Martha now, how meaningful
affirmative not bitter
those zen boys really knew the way
to rake out kitty litter

Oh Martha well, at last we’re home
to Kansas we're returning
with souvenirs and photographs
and not one ounce of learning
Posted by John Wilson at 11:05 No comments:

As I got older, the holidays began to change. By the mid-sixties my sister Dorothy and her growing family had moved to Armagh in Northern Ireland. For a couple of summers, I was put on a boat in Greenock and met in Belfast by my brother-in-law for a two week holiday. I loved these holidays with new countryside to explore, my nieces and nephews to entertain and the wonderful chip shop around the corner. I drank Guinness with my brother-in-law and visited his family at their echoing mansion in Omagh; and went down to stalk the second-hand bookstores on the banks of the Liffey in Dublin and gaze at the blank space where Nelson’s Pillar had recently stood. The only down side was a sleepless night if I was there on July 12 when, outside the pub on the corner, Orange Order celebrants repetitiously hammered on huge Lambeg drums throughout the night.

One thing that Armagh offered was encouragement for my nascent interest in the distant past. Just outside town was Navan Fort which in the 60s was being extensively excavated. It was not actually a fort but a huge, circular ceremonial site dating back to the Neolithic. The archaeologists took weekends off so I would wander around the deserted site peering down post-holes and under tarpaulins. I dreamed of stumbling over a horde of gold coins but soon realized that was not going to happen. What I did find was almost as exciting.