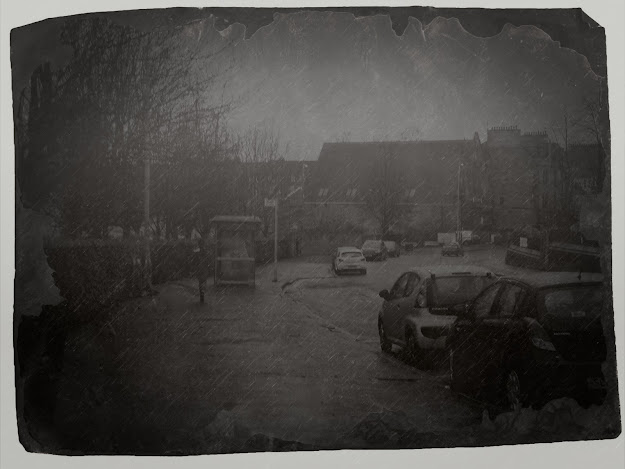 the sociability of bus stops

amidst the gobs of spit

and wet discarded piles of

the stop from falling,

with much more love

than he has ever shown at home.

as if its strength will stop

and keep the drinker from the cold.

A boy goes past

nervously arrogant without his gang,

caught halfway between being lord of the street

and just another one of father’s punching bags.

late shift at the hospital,

to fill one night’s imaginings.

The old man coughs and swigs his wine

the bus is late—so what?

The stop is friendly.

Life's been shite since the factory closed.

He takes another drink, and slips.

The bus stop, treacherous, has moved

He weeps to watch his hope run down the gutter.

Around his feet a blowing paper wraps

An ineffectual kick opens up the sheet.

In the Zoroastrian mythology, Zarathustra planted a cedar tree in paradise. The tree bent under the weight of the Muslim invasion of Persia and became a curved symbol, the boteh, which was a sign of strength as well as modesty. The symbol spread through the Middle East and, with the expansion of the Mughal Empire, into India where it became popular as a design pattern on intricate Kashmir shawls. The East India Company introduced the shawls into Europe in the 17th century and the pattern on them became so popular that they could not import enough to meet demand. Local manufacturing began in France and elsewhere and by the 19th century so much was being woven in the Scottish town where I grew up that the pattern became forever known as Paisley.
In keeping with the theme of castles associated with the places where I lived, the first district we moved to in Paisley was called Castlehead. There was even less evidence of a castle here than at Castle Semple, the story being that it was the site of a long-vanished Roman settlement, established by Agricola and called Vanduara by Ptolomy in the second century.
After the Romans left, few paid much attention to Castlehead until, in the mid-19th century, it became a trendy place for rich Paisley merchants to live. For a couple of thousand pounds, one of them had a two story sandstone mansion called St Cuthbert’s built on Main Road. In the spring of 1959, Jim and Eve rented the ground floor of St Cuthbert’s.
I wasn’t even eight-years-old and it was the fourth place I’d lived—not that I had time to settle in here either. After Mechan’s, Jim was looking for a job but, despite a glowing reference letter from his time in India, his MBE, his recent work on Clydeside and, perhaps less usefully, an ability to speak French and Urdu, he had no luck. Undeterred, or perhaps with little choice. Jim took over an ironmongers (hardware) store. I had little interest except for one thing—I was given the job of clearing some junk-laden, dusty shelves in the back of the shop. It was boring until I moved some scrap and found a treasure—the casing and nose of an 18 pounder shrapnel artillery shell from the First World War. I rushed through to the front shop to show Jim. He must have had a moment of utter horror, seeing his young son rushing happily at him clutching an artillery shell, but he determined that it was safe and I was allowed to keep it. For many years it stood in my bedroom with my meagre collection of foreign coins in it. I still have it and it is a great hit when I present on the First World War in schools, although I only use it as a prop at schools I don’t have to fly to. 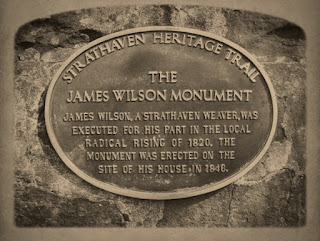 Wilson was buried in an unmarked paupers grave, but his daughter and niece dug up his remains and removed them to Strathevan where they were secretly buried and where a monument stands today. Two other leaders were also executed and those three were the last beheadings in Britain.
So the story of James Wilson’s sad end could have inspired Jim’s tale although I can find no evidence that he was an ancestor. As for the riot, there were plenty to choose from in Glasgow in the late 18th and early 19th centuries, but none fit exactly and I can find no mention of an officer on a white horse being shot, although there is a pub called the White Horse on the Gallowgate. One of the things about researching an autobiography is finding out the truth or lack of it in fondly-believed family tales.
Posted by John Wilson at 14:05 No comments:

The Beglup and the Scribbling

There’s a sunrise every morning,
A sunset every night,
Between then both it’s either dark
Or very, very light.

The Beglup shuns the light of day,
The Scribbling fears the dark,
Thus they will never ever meet
At dusk down by the park.

It cannot be both light and dark,
Tis either one or t’other.
So the Beglup and the Scribbling
Knew nothing of the other.

Until one eve the bright daylight
Was slow in going to bed
And darkness fell a bit too fast,
Or so it has been said.

In any case, for one bright blink
In darkness thick as leather,
The Scribbling fierce and Beglup bold
Were face-to-face together.

They stopped and stared, then screamed and fled,
Their meeting could not be
For each was far too frightful for
The other one to see.

So be mindful of that fated dusk
When next you’re deep in play,
And want to stay up far too late,
Or lie in bed all day

So darkly, darkly shines the moon
At night on Christmas Day
When down below in silver hue
The three-legged fishes play.

They leap and jump o’er hill and dale
So happy to be free
From that sticky pea-green ocean
Which hides them all from me.

They sing a sort of fishy song
In scales of their own choice
Without a single thought or care
For danger’s lovely voice.

From out the east the Aardvark comes
With jaws as wide as stairs
To feed upon the happy fish
Who frolic unawares.

“Oh comely, comely little fish,”
The earth-pig sings out loud,
“Pray jump upon my glittering spoon
And we shall dine most proud.”

The fishes wander to-and-fro
Enraptured by the tune
And one by one they step upon
The Aardvark’s dining spoon.

When sudden one small voice is raised
Amidst the wails and tears,
“I cannot hear enticing tunes
There’s darkness in my ears.”

Then quickly quickly little fish
Pluck darkness from the night
And stuff it in your tiny ears
To quell the sound and fright.

The Aardvark blusters “Come back here!”
As fishes skip away
Back to the hilly sea they run
To swim another day.

The Aardvark glumly then goes home
With rumbling, empty tummy
To dine on porridge and brown toast
And cups of dark red honey.
Posted by John Wilson at 09:12 No comments: