Schoolboys and a Dead Doctor—part 1

Thursday, November 29, 1917 was a chilly, misty day in Edinburgh on the east coast of Scotland. This was not unusual. With luck, if the prevailing west wind wasn’t blowing, the temperature in the early afternoon would pop up to around 45 degrees fahrenheit (7 degrees celsius), before slumping dismally back to somewhere around 38 degrees fahrenheit (3.5 degrees celsius), when the sun set at 4:30. 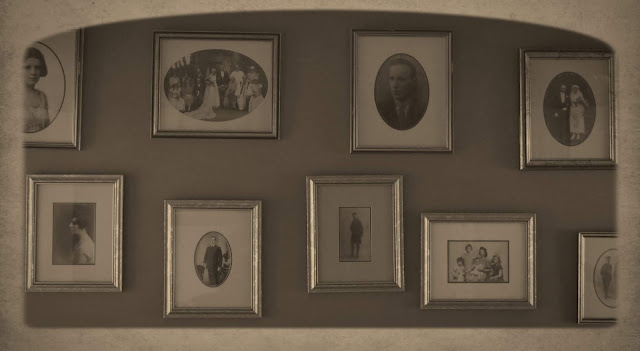 I am surrounded by the dead.
In sepia formality they hang
from the scaffold of the picture rail:
a great uncle killed at Loos
proud in his kilt
before the steamer's sad farewell;
his brother who survived
with a whole body
and forty years of a broken mind;
my grandmother
stern
Victorian
alone
in mourning black forever;
my parents' wedding—
the groom alive with hope,
proud before an empire's collapse—
my mother at eighteen
between giggling sisters,
beautifully shy before the certainty of years.

All are gone,
only the bride's magnificent veil
lies, remembering
in an attic suitcase.

Yet still they live
within the walls of my imperfect memory,
and watch with timeless eyes
my life's amorphous dream unfold.

Who will I look down upon
when I am clay and dust
and stoic, stand and stare
from far behind some dusty pane?
Posted by John Wilson at 09:04 No comments:

Nineteen-sixty-one provided a prelude to the decade that has always been the symbol of the baby-boom generation—my generation. It was a year of endings and beginnings, of echoes back to a fading past and faint rumbles of what might yet be. John Kennedy was sworn in as president, the Bay of Pigs invasion failed, the Berlin Wall went up, Adolf Eichmann was put on trial, and Mary and Louis Leakey unearthed Australopithicus in Olduvai Gorge in Tanganyika, a country that was just beginning its three-year-long life as a nation. Yuri Gagarin and Gherman Titov orbited the earth a total of eighteen times between them and Alan Shephard and Gus Grissom poked their heads above the atmosphere for a few minutes each. Joseph Heller’s Catch 22 was published, Bob Dylan performed at Gerde’s Folk City and 101 Dalmations was released. Dashiel Hammett, Gary Cooper, Carl Jung, Ernest Hemingway and Ty Cobb died. Barack Obama, George Clooney, Princess Diana, Eddie Murphy and Wayne Gretzky were born.
In Britain it was also the year that the farthing disappeared and with it the ‘four-a-penny’ tray of candy at the local store. The soundtrack of that year was provided by The Shadows, Helen Shapiro, Del Shannon, Petula Clark, the Everly Brothers and Elvis. Hancock’s Half Hour, Desert Island Discs and the Navy Lark dominated the radio, and The Lone Ranger, The Avengers, Danger Man, All Our Yesterdays and Sunday Night at the London Palladium filled the small, black and white TV screens. At local cinemas the Guns of Navarone, the Swiss Family Robinson, the Time Machine and Whistle Down the Wind were popular.


In a house in Scotland, a young boy sat in the corner of what seemed to him to be a vast room. The ceiling was high and in its centre was a wide circular vegetative moulding from which, the boy imagined, a magnificent sparkling crystal chandelier had once hung. The moulding round the edge of the ceiling was simpler—long straight narrow ridges and wider street-like hollows. The boy often wished that he could defy gravity and crouch on the flat white ceiling, driving his toy cars along those endless roads. Below the ceiling, a wooden picture rail circled the room, separating the plaster above from the faded patterned wallpaper below. Hanging from the picture rail were a couple of abstract oil paintings by an older sister who had gone to art college in London, and several black-and-white photographs of stern people in formal poses.
One wall of the room was lined with low bookcases crammed with dusty hardbacks—history, philosophy and religion—belonging to another sister who had married a vicar in the Anglican church. As a special favour to one of the boy’s hobbies, a large plastic model of HMS Victory stood atop the bookcase amidst postcards from a third sister in Australia.

The opposite wall was almost entirely taken up with a  deep bay window, which looked out over a narrow front garden onto the main road from Paisley down the coast to Greenock where the River Clyde swung south, became the Firth of Clyde and ran past Great Cumbrae, where in 710 CE St Mirin in an echo of St Patrick cast out all the snakes, and Arran where hardy folk went to celebrate Scotland’s only official nudist beach.
The boy sat to one side of the hissing gas fireplace, the only source of heat in the room. A large, plain-faced, loudly-ticking clock rested on the mantle bracketed by small framed photographs of the three sisters and one of the boy aged about six. A selection of his most favoured toy cars lay scattered and forgotten around him and, by his shoulder, the television stood grey and silent, turned off because this was “grown-up time”.
The grown ups—the boy’s parents, an aunt and her partner, and an older cousin—sat in a wide arc facing the fire. The adult conversation lulled and the boy’s father stood, expelling a grunt of air as the worn bones of his arthritic hip ground together, and headed over to the table on the far side of the room. A bottle of Famous Grouse whisky, a present from the cousin, stood on a tray beside a photograph of a fourth sister, dead before the boy was born. The man poured a measure of scotch into a crystal tumbler and added a few cubes of ice.
“Can I put the soda in?” the boy asked, jumping to his feet. He loved the astonishing release of the pressurized bubbles from the soda bomb. He loved the very name bomb, for that was what the empty grey cylinders became as they were dropped from one of his model planes onto the ranks of his terrified toy soldiers below.
The man nodded. “Not too much, now,” he cautioned.
The boy held the heavy soda syphon shakily and carefully pressed the handle. The bubbling water exploded into the glass, mixing up a chaos of water, gas, whisky and ice cubes.
“Thank you.” The man limped back over to his chair. The boy stood and listened to the magical clinking of the ice against the sides of the glass, then he returned to his seat on the floor by the television and listened.

The adult talk over the whisky around the fire did not mean much to the boy. It was mainly about somewhere called the Indian Raj, a place on the other side of the world that he knew little about. Sometimes the conversation intrigued the boy, as when the talk turned to a fish that for some unfathomable reason was called Bombay Duck, and sometimes he laughed along with the others even though he didn’t understand the joke, but mostly he was confused.
The boy listened, primarily because at this time of the evening the vast room was the only one in the house being heated and, until his mother went and tucked a hot water bottle into his bed, he didn’t want to brave cold sheets. More importantly, though, he listened because the stories of the Raj were told with such a powerful sense of loss that he was utterly convinced that the place they referred to must be so extraordinarily wonderful that it was worth the struggle to understand it.
This feeling was reinforced by the breathtaking stories the boy’s father told him: hunting tigers from the backs of elephants, surviving the great Bihar earthquake, shooting a rabid dog and having his favourite pony killed by a wild boar while out hunting. The last of these stories was illustrated by the wild boar’s tusks mounted on silver stands on the bookcase beside the model ship, and by the man’s limp which had been caused by his fall from the dying horse.

The boy finally went to bed, drowning in nostalgia for a lost past. He lay awake imagining the beguiling unreal memory world of the Raj so much more compelling and powerful than the damp grey Scottish reality that trapped him. But, as with all nostalgia, beneath the memories and fantasies there was sadness. The boy was doomed never to recapture his parent’s world and yet the seductive liar of nostalgia wove a bewitching silken thread around him, entwining itself around his experiences and perspectives in subtle ways that he was rarely even aware of. Those evening conversations around the fire gave birth to a ghost peering over the boy’s shoulder at everything he did, a wisp of history flickering in the corner of his eye yet gone when he turned to look at it.
Even in 1961 as the boy lay in bed making up stories of Imperial adventures in the Khyber Pass, he knew that, except in his imagination, he could never attain this wonderful, perfect place that his parents loved and missed so much. It was the object of such powerful nostalgia precisely because it no longer existed and, although he had no inkling of this, it meant that the boy was destined to spend much of his life trying to go there.
Posted by John Wilson at 09:51 No comments: